I was scanning the clearance aisle at Wal-Mart today and found a pack of large die cut apples for 50 cents! So I made number puzzles to put in math stations this week since it is Johhny's birthday and all. I made one for numbers 1-10. I'm thinking I need to go on and make 11-20 for my higher kids. 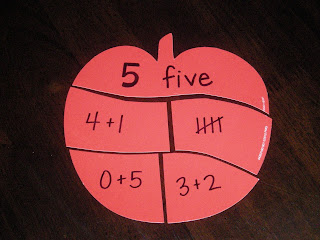 We've been slowly working on addition strategies and finding as many combinations of each number as we can. So this activity will be a good review/reinforcement of what we've been practicing. Here's a picture from a few weeks ago when we were working on making 5's. 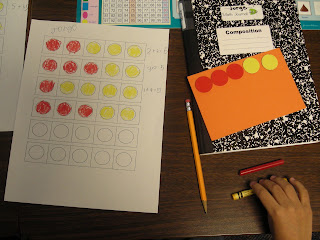 This game is called "shake and spill". The kids put 5 counting chips in a cup, shake them up, spill them, color  what they spilled, and then write an equation. That orange thing is a little foam mat so the counting chips don't hit their desks and make so much noise, but if they all had their notebooks out like this little guy I guess that would've worked too. Also, 21 kids shaking up counters in a cup is almost deafening so I don't know why I even tried to make the spilling part quiet. It made sense at the time.
On another note, did anyone know that Wal-Mart now has a 97 cent area much like Target's dollar bins? I'm not loving it as much as Target's but I give them an E for effort and there were some very cute teachery notepads, stickers, bookmarks, and tote bags. I bought some super cute cupcake sticky notes and plastic (reusable, not throw away) plates for a friend's upcoming birthday. Maybe I'll fill the plates with cupcakes or maybe I'll try and make one of these cake stands I've seen on pinterest. Anyone tried this yet?

Email ThisBlogThis!Share to TwitterShare to FacebookShare to Pinterest
Labels: Math